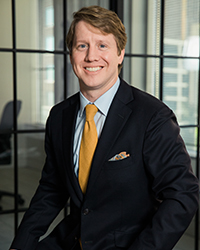 Josh Vick grew up in the small town of Camden, Alabama, where he learned from an early age that there is no substitute for hard work, dedication to a cause, and doing what you love. For Josh, the practice of law is the perfect opportunity to apply those principles on a daily basis.

Josh’s practice is entirely devoted to civil litigation, with an emphasis on catastrophic injuries, medical malpractice, product liability, and commercial trucking litigation. In 2014, he was inducted into the Multi-Million Dollar Advocates Forum, one of the most prestigious groups of trial lawyers in the United States. Membership in the group is limited to attorneys who have obtained multi-million dollar verdicts, and less than 1% of attorneys in the United States are members.

Since 2016, Josh has been recognized in the Mid-South Super Lawyers list of “Rising Stars” in the legal profession. Attorneys under the age of 40 are independently evaluated and chosen for the Rising Stars list based upon peer recognition and professional achievement.

Josh attended Auburn University, where he studied public relations and business. After graduating from Auburn, he moved to Washington, D.C., where he worked in the United States Senate. He later returned to Alabama to pursue a Juris Doctor degree from the Cumberland School of Law at Samford University and joined Goldasich, Vick & Fulk in 2011. A sample of recent verdicts and settlements obtained by Josh include: