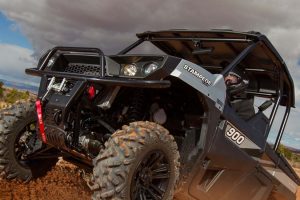 The recall involves about 1,100 of the Bad Boy XTO and Bone Collector XTO battery-powered off-road vehicles, which are also known as “Bad Boy Buggies” or all-terrain vehicles (ATV).

The lack of seat belts is a serious safety hazard in rollovers. The recalled buggies have two benches — one in front and a rear-facing bench in the back — but no doors to stop occupants from being ejected.

The vehicles’ high center of gravity makes them prone to rolling over, according to lawyers for a 14 year-old boy who died in Georgia.

The boy, Cody Pike, was riding in a Bad Boy XTO that rolled over when the driver made a left-hand turn. He was ejected and crushed under the 1,700-pound vehicle. The accident occurred in Toombs County, Georgia, in 2014.

The recalled vehicles have serial numbers ranging from 8000020 through 8004934, which are located the steering wheel column.

Owners are being asked to immediately stop using the vehicles and contact the company to schedule a free seat belt installation.

Contact Textron Specialized Vehicles at 855-738-3711 from 8 a.m. to 5 p.m. ET Monday through Friday or online at www.badboyoffroad.com and click on “Recall Information” for more information.