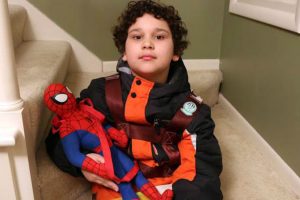 “Jury finds that the severe brain damage suffered by Julien Florez was a result of negligence and bad decisions by a doctor.”

Cook County Circuit Court jury granted a Michigan family $50 million on Tuesday, agreeing that the severe brain damage suffered by the family’s oldest son was a result of negligence and bad decisions by a doctor and attending nurse who delivered him at NorthShore Evanston Hospital in 2009.

“The jury found the doctor and nurse failed to act reasonably,” said attorney Matt Williams with Salvi, Schostok & Pritchard law firm in Chicago. He represented parents Aimee and David Florez and their son, Julien Florez, in the lawsuit.

“If they had done a C-section sooner he would have avoided the extended period of time where (Julien’s) heart rate dropped to the point where it caused a lack of blood flow and injury,” Williams said.

Julien Florez, then 8, is shown in March. A jury awarded his family $50 million after he suffered brain damage following negligence by a doctor and nurse at NorthShore Evanston Hospital, a Cook County jury ruled on Tuesday, Oct. 9. (Aimee Florez)

Williams also cited the doctor’s decision to give Aimee Florez the drug Pitocin, which strengthens labor contractions, instead of doing an immediate cesarean section to remove the baby surgically after they detected a problem.

The Pitocin increased the stress on Julien and exacerbated his struggling condition, Williams said.

According to the verdict form, the jury found the “total amount of damages suffered by Julien Florez as a proximate result of the occurrence in question is $50.3 million.”

According to the verdict form the $50.3 million verdict amount was broken down as:

Representatives for NorthShore University Health System said in a prepared statement that they plan to appeal the verdict.

“We are disappointed with this decision and intend to appeal the matter. We support the clinical care provided by our labor and delivery team who continually places the utmost priority on patient care and safety,” wrote Jim Anthony, spokesman for NorthShore University HealthSystem.

Aimee Florez, 43, said she chose to deliver her first child at the Evanston hospital because that’s where she received care while earning her master’s degree and working at Northwestern University. She lived in Kenosha, Wis., at the time.

Julien was five days late, Aimee Florez said, and she was scheduled to have labor induced that evening at NorthShore Evanston Hospital. Instead, she went into labor naturally earlier in the day after a healthy pregnancy and headed to the hospital.

But after about three hours of labor the baby’s heart rate dropped, Williams said, which can “be a sign that the baby is not getting enough oxygen.” That happened multiple times, but each time the heart rate came back up.

After a few more hours the doctor prescribed Pitocin, a “powerful drug that can stimulate contractions” but also can put stress on the baby, Williams said.

The baby’s heart rate dropped again, and instead of doing an emergency C-section, which would have delivered the baby within 30 minutes, it was marked as “routine, so there was no sense of urgency,” Williams said.

“He was born lifeless, he was blue, which means he was deprived of oxygen right before birth,” Williams said. “He was limp and his heart rate was under 60.”

An MRI showed that decreased blood flow during labor caused subsequent brain damage, Williams said. Since then he has been diagnosed with cerebral palsy and, at age 9, knows about 30 words. He also has hearing loss, trouble walking and “decreased motor skills.” He likely will never be able to hold a job or live on his own, among other concerns.

Aimee Florez said she and her husband waited until 2014 to file the lawsuit because “I was just so focused on Julien and trying to learn and figure out what was wrong with him. We had a diagnosis but we were still learning what it all meant.”

Florez and her husband “kind of hit a wall” as they realized the care and schooling that Julien will require for the rest of his life, Florez said.

NorthShore offered a $10 million settlement after the suit was filed, but the family decided to proceed to trial. Williams said the $10 million the hospital offered would not cover the care that Julien will require for the rest of his life.

The couple went on to have two daughters, now 5 and 3, Florez said. Both are healthy. The family has moved to Michigan, where Aimee Florez grew up, to be closer to her relatives.

As for Julien, “he goes to a school in an environment with other children with cognitive disabilities,” Florez said. “He receives therapy, occupational, speech and language therapy and also physical therapy. Those are the main things right now.”

By Goldasich, Vick & Fulk | Posted on February 26, 2019
« Why new mothers are needlessly injured, and some die, giving birth every year in the U.S., in graphics
Doctor’s failure to act and properly respond to fetal distress results in $6 Million settlement »