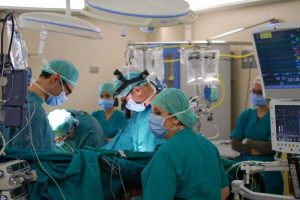 In June 2011, Mary Bailey of Selma became unusually tired after climbing the stairs at her office.

She went to her primary care doctor, who urged her to check in to Vaughan Regional Medical Center in Selma as a precaution. While at Vaughan, she came under the care of Dr. Seydi Aksut, a cardiologist who diagnosed her with significant blockages of blood vessels near the heart and inserted two stents to prop the vessels open.

But her health didn’t improve. In fact, it got worse, according to a lawsuit filed in 2015. Bailey became winded after just a few steps and had sharp pain and pressure in her chest.

She made a couple more appointments with Aksut, who prescribed Plavix, a drug that prevents red blood cells from sticking together and forming a clot. The drug didn’t do the trick either, and Bailey continues to have pain, dizziness and shortness of breath, according to her lawsuit.

Several years after the stent procedure, Bailey and other patients received letters informing them that Aksut may have performed medically unnecessary procedures – including scores of stents placed in vessels that weren’t dangerously blocked. In 2015, she joined dozens of former patients who are suing the doctor in state court.

“Many of the patients were not aware they were a pawn in this whole moneymaking scheme until they received this letter, which was not an easy letter to get,” Dennis Goldasich said.

Many of the filings sound similar to Bailey’s, including at least one case involving a man who said he received four stents on four separate occasions from Aksut and experienced steady declines in his health after each procedure.

Almost 40 lawsuits have been filed by individuals treated by Aksut. Two class action suits have also been filed. The cardiologist no longer practices at Vaughan Regional, but he still sees patients at a clinic and Jackson Hospital in Montgomery.

Aksut studied medicine in Turkey, trained as a resident in Chicago and then completed a fellowship at The University of Alabama at Birmingham before opening his clinic – the Selma Heart Institute – in 1999, according to the Demopolis Times.

He practices cardiology in an area with a shortage of doctors and an abundance of advanced heart disease. Residents of the Black Belt are much more likely to die from heart disease than the average Alabamian, according to a 2007 report by the Alabama Department of Public Health.

Aksut specialized in implanting stents using a long tube called a catheter threaded through blood vessels in the leg or groin. The cardiologist uses x-ray technology to guide the stent, which looks like a small metal cage, into the right spot and uses a small balloon to expand it into place. Stents save lives for patients who need them, said Dr. Roxana Mehran, chair of the American College of Cardiology Interventional Council.

Aksut, practicing in rural Alabama, quickly became one of the busiest cardiologists in the state. In the article in the Demopolis Times, Aksut said he was excited about the high volume of patients in his practice.

“Hopefully I will be able to help a lot of people,” Aksut said to the Times.

Federal data reveals just how busy his practice was. In 2012, he inserted more stents using a catheter in Medicare patients than any other doctor in Alabama – even those practicing in much larger cities.

Mehran said several industry groups already track cardiology procedures to identify doctors who might be performing unnecessary work. Cardiologist have come together to develop of publicize stent guidelines to reduce unnecessary surgery. But in some cases, doctors may have different opinions on whether a stent is necessary, or whether the patient could be treated with drugs instead.

“It’s a judgment call,” she said. “Before you go to the invasive procedure, there are many many tests to help you determine where the patient falls in the diagnosis category.”

An attorney for Vaughan Hospital released a statement about the lawsuits.

“Because of the hospital’s commitment to regulatory compliance, in September 2013, it voluntarily disclosed this matter to the Civil Division of the Department of Justice. Through counsel, it also engaged independent medical experts to perform an objective review of all stent cases involving the physician in question,” according to the statement. “When this review was complete, out of an abundance of caution, the hospital notified patients who may have been impacted by this matter to inform them of the findings and offer them a follow-up meeting with an interventional cardiologist or physician of their choice at no cost.”

“Many of the patients were not aware they were a pawn in this whole moneymaking scheme until they received this letter, which was not an easy letter to get,” Goldasich said.

“It is my firm belief that there was, at a minimum, a blind eye turned to his conduct,” Goldasich said. “At a maximum, I think there were financial reasons why the hospital was complicit with Dr. Aksut.”

LifePoint Hospitals, Inc. owns dozens of rural hospitals, including Vaughan Regional Medical Center. In 2013, the company notified federal regulators that some cardiology procedures performed at Vaughan and another hospital in West Virginia might not have been clinically necessary, according to a report submitted to the Securities and Exchange Commission. The federal government began investigating the hospital in West Virginia, but has not announced any action against Vaughan.

Gerald Brooks, an attorney with the Serious Injury Law Group, is representing several former patients in lawsuits against Aksut. One of his clients had several medical bills go into collections after Aksut performed an unnecessary stent operation, Brooks said. The client filed a lawsuit after several doctors told him he didn’t need the stent, but he still receives regular calls from a collection agency.

Doctors cannot remove stents once they have been implanted. Brooks said greed drove Aksut to subject patients to potentially dangerous procedures that could potentially require a lifetime of follow-up care.

“It’s just the greed where he goes in for an operation that he doesn’t need, and then he is hounded for bills for that procedure he never needed,” Brooks said.

Like Goldasich, Brooks said he still has questions about how much Vaughan Regional knew about Aksut’s actions.

It may be years before any of the lawsuits against Aksut go to trial. Mehran said similar cases have tarnished the reputation of cardiologists, causing patients to question a procedure that has improved care for heart attack patients.

“I just think that it’s really sad because our sub-specialty is a very difficult one and we save lives every day,” Mehran said. “And when these stories get in the news, patients begin not to trust their heart doctors.”